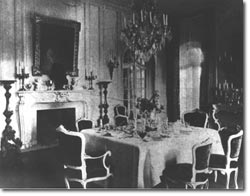 In the late 19th century members of San Francisco’s wealthy class built country homes on the Peninsula and in the Santa Clara Valley to escape the annoyances of city life, to entertain their friends on a lavish scale, and to pursue avocations only possible in rural spaces.

The year was 1887. A winegrowing region flourishing in the Santa Cruz Mountains attracted the attention of San Francisco bachelor Charles Adolphe Baldwin. Baldwin acquired 70 acres very near the land and vineyards of attorney and viticulturalist John T. Doyle in what is now Cupertino, California. A wine cellar was constructed and grapes were planted. Award-winning wine was produced.

In 1895, versatile San Francisco architect Willis Polk was commissioned by Baldwin to design for the estate, known as Beaulieu, a pavilion reminiscent of the style of buildings at Versailles near Paris, France. The result was an elegant country estate nestled among sprawling oak trees and acres of vineyards. The neoclassic design of the house included Ionic columns and arched windows. Conceived in the style of Louis XVI, the ornately paneled dining room was furnished in white and gold. The spacious salon was an acclaimed trendsetter with its crystal chandelier, sconces, and fireplace. Floor-to- ceiling bookshelves and an oval skylight are still features of the library. The grounds featured a formal sunken garden, pathways edged with balustrades, and a reflecting pool. A 1902 issue of House and Garden magazine contains photographic illustrations of the pavilion and gardens.

The pavilion was created for family use and entertaining. In a farmhouse located behind the pavilion, cooking and domestic chores took place. Ranch hands and guests stayed in the two original cottages that stood north of the pavilion (there is one replica cottage remaining –East Cottage). The Baldwins dazzled the locals with impressive parties, electricity, and the area’s first automobile.

After five years, the Baldwins and their two sons moved on to Colorado Springs, Colorado, where they would build a much larger house in a similar style.

The next owners of Beaulieu were Harriett Pullman, heiress to the railroad sleeping car fortune and husbands Francis Carolan, and, after his death, Arthur Schermerhorn. The Carolans's guests included diplomats attending the Panama-Pacific Exposition of 1915. Harriett Pullman probably nicknamed the house “le Petit Trianon.”

It was industrialist E.F. Euphrat, president of Pacific Can Company, who sold the property in 1959 to the Foothill College District as the site for the De Anza campus with a specific request to save the Trianon and the massive stone winery, which later became the college bookstore.

By 1968, however, district officials were considering demolishing the former country manor rather than paying to renovate it. A hue and cry was raised, led by Cupertino historian Louis Stocklmeir and former college district trustee Mary Levine. Together, they formed the Trianon Foundation to raise funds to restore the crumbling house. The foundation succeeded in getting Le Petit Trianon listed on the National Register of Historic Places in 1972 and grant money was awarded to the restoration project. District officials including Superintendent Calvin Flint were surprised at the vigor and success of the fund raising effort for salvation of the Trianon.

The building was moved from its original site, where the Flint Center for the Performing Arts stands today, to a temporary location behind the college’s Learning Center building. The once elegant villa sat weather beaten and abandoned on railroad ties until 1974, when it was moved onto a permanent foundation. With funds raised primarily in the local community, restoration work was completed in 1982 with the building’s six major rooms converted to educational uses: exhibit hall, classroom, research library, lobby area, and offices.