Wherever There's A Fight

Wherever There's A Fight: A History of Civil Liberties in California 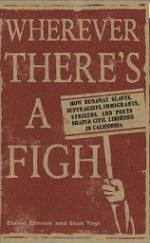 An exhibition based on the book

ADMISSION Free and open to the public.

The California History Center is proud to bring back this exhibit and to have it as part of our permanent collection in both English and Spanish. In relation with The Audrey Edina Butcher Civil Liberties Education Initiative this exhibit will run through to March as part of our Day of Remembrance celebration. With the combined efforts of both the exhibit and initiative the CHC hopes to immerse De Anza College's students in the study of civil liberties to nurture a stronger awareness of these liberties and the ability to advocate for their protection.

Fourteen interpretive panels of photographs and texts tell the stories of ordinary people capable of extraordinary acts, who fought violations of their civil liberties in California, reflecting the prejudices and political winds of the times.

These include Paul Robeson, who told the House Un-American Activities Committee, “You are the Un-Americans and you ought to be ashamed of yourselves.” Anton Refregier’s colorful murals, targeted for destruction by a 1953 Congressional inquisition but ultimately declared historically protected, depict the true stories of Indians at the missions, anti-Chinese riots, and labor strikes. And in 1939, the Kern County Board of Supervisors banned John Steinbeck’s instant best-seller Grapes of Wrath, though 600 readers had already put it on reserve.