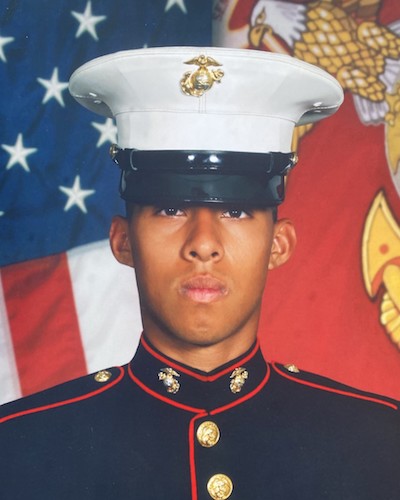 I joined the Marine Corps right after high school, because I didn't have any college aspirations due to my family history and also because I’m first-generation.

I was an average student in high school and initially thought I was going to do 20 years in the service. By joining the Marines, I felt that things would be different, as everyone around me was trying to be the best that they could. But that was not the case.

During my time in the service, I was fortunate enough to have a partner who encouraged college education. I also met my first mentor, an African American man with the highest enlisted rank possible, who also had a master’s degree in education. These people were a pivotal part of my life and I will always be grateful for them.

Soon after, I began attending college classes after a long day's work. I also planned my educational career. I decided I would major in business and help my father with the family construction company. But like many of us have realized, our plans usually don't go as planned.

My initial plan after leaving the service was to finish my classes at De Anza College and transfer as fast as possible to San José State University. But after transitioning out of the Marine Corps, I went through an emotionally traumatic experience. I lost people that I loved and cared about, fell into a pit of depression and anxiety, and had an overwhelming feeling of loneliness. In search for a sense of belonging, I began looking for veterans’ business programs and found Bunker Labs, a veteran entrepreneurship program.

At Bunker Labs, I was guided and mentored by other veterans who have been out of the service for years. They were able to give me advice on how to navigate the difficulty of transitioning back into the civilian world. My biggest challenge in transitioning out of the military was facing my own self-doubt and overcoming misconceptions about my own life and reality.

Getting A Sense of Purpose

As young 18-year-olds, we don't know much of anything. Joining the service gave us a sense of purpose and identity, but once you leave that, you could lose who you are. What helped me succeed in college was being able to reach out for help and being open with my teachers, counselors and even other students. As veterans, we have a unique story compared to most, but that doesn't mean that we are different from anyone else.

Community college is a starting point for many and being open with your experiences will take you a long way. In my short 23 years of existence, I've come to value the experience of my elders because they have lived through what many of us go through today. I wouldn't change how I got to college because I need to go through those experiences to become the person that I am. There are things that I wish I would have done differently, or things I would have liked to know at a younger age, but those issues are in the past now, so all we can do is focus on the now – so we can have a better future.