The Women, Gender and Sexuality Center

Welcome! We're a place for activities, support and advocacy for a radically inclusive environment – where students, faculty members and classified professionals are free to self-determine their gender and sexual identities, without harassment, discrimination or violence.

On this webpage, you'll find information about upcoming events and activities, along with helpful resources and more!

Congratulations to All Who Participated in This Year's Lavender Grad Celebration on June 14! Vice Mayor Alysa Cisneros joined the Sunnyvale City Council in 2020 as the first directly elected representative for District 2, including downtown and surrounding neighborhoods. She is both the first Latina and the first openly LGBTQ+ member of the council. She is also a faculty member in the De Anza Political Science Department, where she teaches Introduction to American Government and Social Movements since 1960.

Cisneros is proud of her De Anza roots: She attended this college from 2011-2013 before transferring to Mills College to earn a bachelor's degree in Political, Legal and Economic Analysis and a master's degree in Public Policy. She has worked as a community organizer and public policy analyst, while remaining committed to advancing the interests of poor people, people of color and the LGBTQ+ community.

Read an interview with Alysa Cisneros

Missed the Queer and Now Conference?

This year's Queer and Now Conference was held on May 23, with featured guests including

More About Queer and Now

This year's Queer and Now keynote keynote speaker, athlete and activist Layshia Clarendon, is currently the point guard for the WNBA's Minnesota Lynx.

Queer and Now is an annual conference at De Anza that focuses on the larger and local LGBTQ+ community, along with student success, equity, intersectionality and social justice concerns.

This year's sponsors include the De Anza Student Government, Office of President Lloyd Holmes, Student Success and Retention Services, and the Women, Gender and Sexuality Center – in collaboration with the Office of Equity, Physical Education and Athletics Division and REACH.

The center adopted a new name in 2021 to reflect our commitment to providing expanded services and resources, while we continue to honor Jean Miller with a new scholarship program!

more About Our Name

We've been thinking more about the use of these terms, and we've decided to use the spelling "women" going forward. For an explanation and some background, please read our statement on this decision.

Stay in Community With Us

You'll find more sources of help and information on this LGBTQI+ Resources and More webpage. 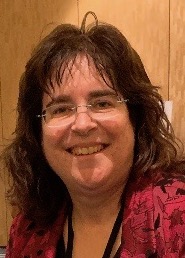 Roseanne is Interim Faculty Coordinator for the Women, Gender and Sexuality Center.

Please contact her for more information about Lavender Graduation and the Queer and Now Conference!

The Women, Gender and Sexuality Center Advisory Council (previously called the JMRR Advisory Council) was formed in 2019 to build coalitions across the De Anza campus in support of gender and sexuality equity. Council members are from several instructional divisions, the Office of College Life, the Library, Psychological Services and International Student Programs.

We meet monthly to discuss programming and events and to build capacity for gender and sexuality equity work at De Anza. If you’re interested in being part of the advisory council, please contact Roseanne Giannini Quinn, interim faculty coordinator, at quinnroseanne@deanza.edu

If you're looking for the Women, Gender and Sexuality Studies academic program, please visit their website to learn about classes, internships and certificates.