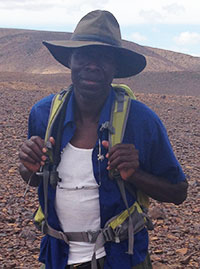 Anthropology instructor Isaiah Nengo was inspired to study human evolution when, as a high school student, he heard a talk by famed paleoanthropologist Richard Leakey. Leakey is the son of Louis Leakey, one of the first anthropologists to recognize Africa as the origin of humanity.

“We’re most closely related to the great apes and all those species are found in Africa,” said Nengo. “Louis Leakey went back to Africa and started looking.”

The Leakeys discovered hominid fossils in the Olduvai Gorge and Lake Victoria Basin. Their findings convinced other scientists that humanity evolved in Africa. As a child growing up in Kenya, Nengo was only vaguely aware of these discoveries. Then he heard Richard Leakey.

“That’s when I got hooked,” said Nengo. “I became entirely fascinated. I thought, ‘this is exciting,’ but I didn’t think of it as a career [at first].”

Nengo enrolled in Nairobi University to study zoology and botany. When he graduated, he wrote to Leakey and was offered a volunteer position. Volunteering led to a fellowship and a sponsorship from the Smithsonian to study biological anthropology at Harvard.

“Anthropology in the past was used to classify people, but the discipline has done a lot to show the things that are common to us,” Nengo said. “Whatever information we get is not for a particular group or a particular place -- it is the human story.”

After earning a Ph.D., Nengo taught at Miami University of Ohio, UC Berkeley and Santa Clara University. He joined De Anza in 2006. In 2012, he was granted a Fulbright scholarship to spend an entire year in Kenya excavating and researching.

"Once we find fossils, we bring them to a museum, clean them, study them and share the results with everybody else,” said Nengo. “With the Fulbright I had the sustained focus I had not been able to have before. It’s amazing how much time you can spend on a tooth.”

Nengo has taken students on trips to Songhor, a fossil-rich site in western Kenya and to Napudet, in the Lake Turkana Basin of Nothern Kenya. 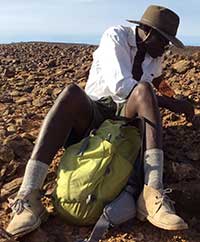 On the most recent trip, funded by the National Science Foundation and the Leakey Foundation, the group found a complete primate skull between four and eleven million years old at Napudet. It took six hours of careful digging each day for three days to fully extricate the skull.

“Skulls are extremely rare. People work for years without ever finding one,” said Nengo. “This was rewarding because I was directing the project.”

The opportunity to discover rare fossils is only one reason Nengo takes students with him on digs. He is also interested in what the students can learn about themselves.
“One student, it never occurred to him that he would leave the country, it never occurred to him that he would go to Africa,” Nengo said. “I could see a change in how he viewed himself. There was a transformation.”
Next summer, Nengo hopes to take five to seven students with him to the northern district of Kenya to search for chimpanzee fossils. He’d also like to establish a field school for students to do actual research, find fossils and meet people in the areas where they excavate. To Nengo, taking students into the field is the best way for them put their learning into practice.

“They can see all these people focused on this work. They’re given a responsibility and it’s not homework -- it’s real,” said Nengo. “It allows [students] to see themselves as part of something bigger and more important.”

The Marketing Office is here to assist you. If you have an event to promote, please notify the Marketing Office at marketingoffice@deanza.edu. Staff can help promote your event on the website and social media. For tips on planning, use the Plan and Promote Your Event Checklist.
Need a poster, brochure or postcard? Need someone to help with your website or take photos at your event? Submit a Project Request Form.

Please join your faculty and staff colleagues for the holiday reception on Thursday, Dec. 11, from 2-3:30 p.m. in Conference Room B.  Holiday beverages and cookies will be served. 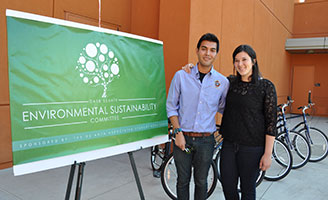 The DASB Senate recently celebrated the donation of 20 bikes to the campus bike program. The program was created by the DASB as part of its commitment to environmental sustainability. Eligible students can rent a bike for the quarter for on- and off-campus use.
"The bike program is the beginning of the future for De Anza College. Students can be provided alternative means of transportation without having to pay anything,” said DASB President Julia Malakiman. "There is a huge demand for this program, and the DASB senate  only plans to expand it."

The bikes were donated by Calabazas Cyclery in San Jose. 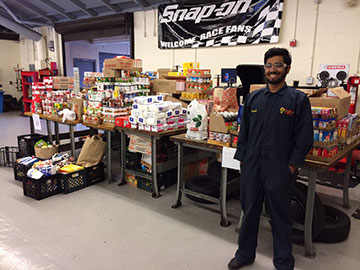 The day and evening Auto Tech programs collected almost 7,000 cans as part of their annual canned food drive. As in previous years, all donations went to West Valley Community Services in Cupertino to make the holidays happier for local families.

"I give the kids all the credit," he added. "I just direct, maybe inspire, but the kids do everything."
Want to donate too? Drop off canned goods in  the Second Harvest food barrel located in the  lobby of the Administration Building. Thanks to  Gilbane Building Co. for sponsoring. 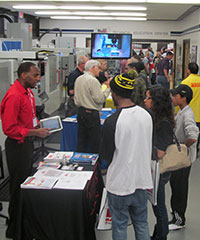 More than 100 machining teachers and administrators from throughout the state attended the 6th annual HTEC conference at De Anza in October. The conference covers new manufacturing technologies and processes, and gives industry professionals an opportunity to discuss manufacturing issues in the Bay Area.

The machining/CNC program has been in place since the college opened in 1967. De Anza has one of the most varied collections of machine tools of any college program on the West Coast.
“The success of the manufacturing program is represented by one of the most diverse advisory committees in the state," said Mike Appio, CNC instructor and department coordinator. "Companies such as NASA, Apple, Google...help shape the curriculum that makes our students so successful.” 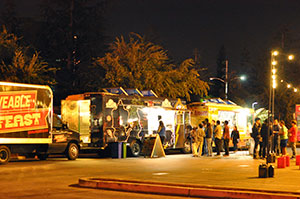 Moveable Feast made its campus debut in Parking Lot A on Nov. 7. The food truck fest is currently on hiatus, but will return Fridays starting Feb. 6. A percentage of event sales goes to DASB.