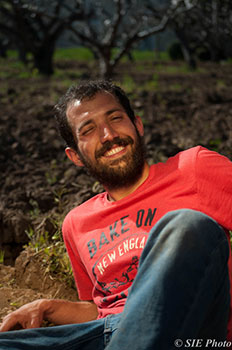 Ali Adhami’s film, “Reinforced,” was selected for the semifinals in the Alternative category of the 43rd Annual Student Academy Awards. This accomplishment puts Adhami’s film in the top 5 percent of all films submitted in a year with a record-breaking number of entries.

“Reinforced” is an 8-minute visual statement on the nature of war and prejudice.  Three tribes -- Red, Blue and Green -- are watched over by two angels, one light and one dark.  There are no words spoken, but there is music to augment the images. Adhami’s brother Ardeshir composed the film.

Adhami has lived in Iran, Armenia, Malaysia and the United Arab Emirates. He came to the U.S. in 2011. In each place he has been struck by how ethnic, cultural, racial and religious differences divide people.

“The labels that define us seem very different but we all love our moms, we love our nations,” Adhami said. “We just don’t have the capacity to see the whole thing as one united global phenomena. We tend to attach ourselves to one single group of people and fight along with those people even though there is no reacteson to fight.”

Tavernetti added, “Ali has such a unique vision and signature style. It's so rewarding that the Academy recognized his talent by advancing 'Reinforced" to the semi-finals -- and by extension honored the work that we do in the Film/TV Department." 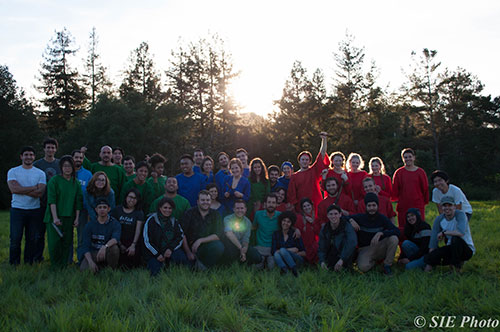 Many other Film/TV students acted in and worked on “Reinforced.” Nicole Sim and Katelyn Gonsalves produced the piece and Asal Poursorkh, Edoardo De Armas and Cody Hawkinson worked as directors of photography.

“The students and faculty here are amazing and getting to work with them was phenomenal,” said Adhami. “I’m proud of the level of commitment they’re willing to put into making something happen. It wouldn’t have been possible without these people.“

Although Adhami's film did not advance to the finals, he was still happy to be recognized. The Student Academy Awards are given by the Academy of Motion Picture Arts and Sciences, the same organization that awards the Oscars. The Student Awards are open to students from all colleges, including 4-year and graduate film schools. In more than four decades, only four community colleges have won national awards. De Anza won in the Animation category in 1986 and 1989 and holds the record among all community colleges that have placed.

De Anza recently hosted its first hip-hop education summit, Rock the School Bells, in collaboration with Skyline College. The event provided students an opportunity to express themselves through performance and deconstruct current events. The Men of Color Community (MC2) and the Office of Equity co-sponsored the event. 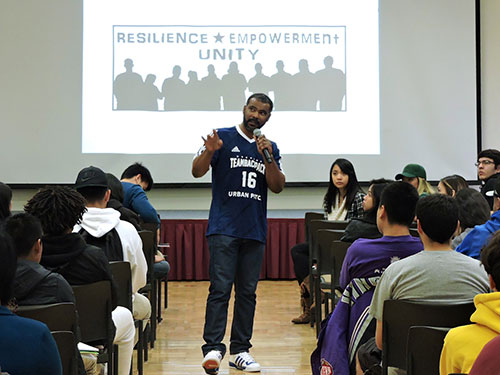 “Hip-hop has a broad range of appeal, and its history is one of protest and resistance,” said Erick Aragon, an MC2 mentor and counselor in the Outreach Office. De Anza recently hosted its first hip-hop education summit, Rock the School Bells, in collaboration with Skyline College. “We wanted to bring the entire community together and talk about social issues and strength.”

More than 400 students, faculty and staff came and went throughout the day. Workshops included, “Hip-Hop and Hypermasculinity,” “Pedagogy of a Hip-Hop Head” and “Rediscovering Hip-Hop.” Financial Aid staff member McTate Stroman, a spoken word artist and adviser to the 4 Elements Hip-Hop Club, gave the keynote speech.

“Hip-hop is about the unification of cultures and I really wanted to get that message across to the students,” Stroman said. “For many of us, our passions are elements of hip-hop -- emceeing, DJing, dancing, art. [Students] can bring themselves with them to school and pack their passions in their backpacks.”

MC2 plans to host an even larger event next year with expanded workshops and more performances.

Health Services has partnered with the One Love Foundation to bring relationship violence awareness and resources to campus. Their campaign, "That's Love, That's Not Love," aims to inform students of the warning signs of abuse. 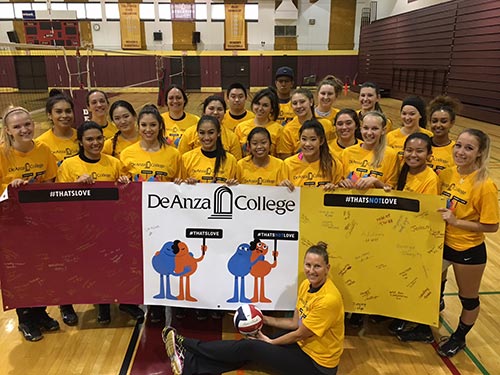 "If we can change the social climate that currently enables abuse to take place and reduce the social capital required for bystanders to intervene, we believe we can ultimately change the unacceptable statistics around relationship violence," said Mary Sullivan, director of Health Education and Wellness.

Health Services has partnered with the One Love Foundation to bring relationship violence awareness and resources to campus. Their campaign, "That's Love, That's Not Love," aims to inform students of the warning signs of abuse.

Sullivan and Health Services staff have been to different classes, visited several sports teams and set up a table at Club Day to get the word out. Sullivan asks students to differentiate between signs of love -- trust, affection and respect -- and possible signs of abuse like jealousy and controlling behavior. She also wants students to recognize her as a safe person to talk to.

Sullivan added, "Without safety there is no health, and without health you can't learn." 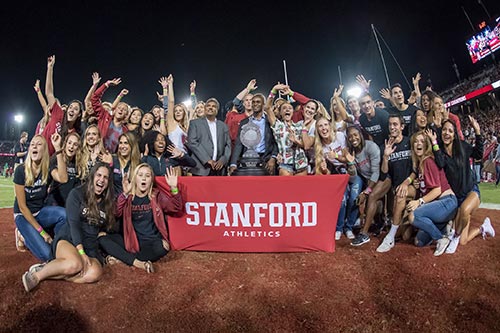 Kulwant Singh recently represented De Anza and the National Association of Collegiate Directors of Athletics (NACDA) for the Learfield Directors Cup to Stanford University. Singh is the first community college athletics director to present the award.

Singh serves on the executive committees of NACDA and the National Alliance of Two-Year College Athletic Administrators (NATYCAA). He is the immediate past president of NATYCAA.

The Directors' Cup is an all-sports award given to institutions maintaining a broad program and achieving success in both men's and women's sports. The overall champion records the highest number of points in their division's standings. Stanford has won 22 years in a row.

The men's soccer team is currently ranked seventh in the nation in their division with a record of 11-2-3. Check their schedule and all other teams' at www.deanza.edu/athletics.

Missed Opening Day? Watch our De Anza Votes video! Faculty and staff talk about the first time they voted, why it's important, and how faculty and staff can encourage students to vote. Non-partisan voter resources are available at www.deanza.edu/vote.