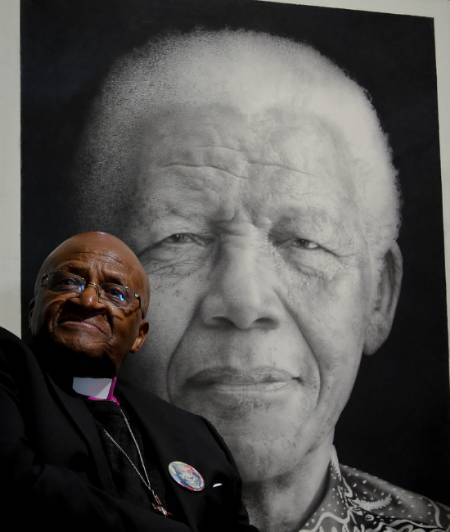 From South Africa to Cupertino: A solo photographic exhibit by Sumaya Hisham of Archbishop Desmond Tutu

CHC is fortunate to offer this fall, a unique solo, photographic exhibit documenting the day-to-day life of Nobel Peace Prize Laureate, Archbishop Desmond Tutu of South Africa. Entitled, #TUTU – a man at prayer, a man at work, a man at rest,” this exhibition, created by South African photo-journalist, Sumaya Hisham documents the life of the Archbishop exposing some  never before seen  moments in the life of the famous South African. The exhibit will run from October 19th through December 3, 2015 and is being held in conjunction with the Euphrat Museum of Art which will also feature some of Sumaya’s photographs in its Fall exhibit entitled, “Endangered.”

#TUTU comes to the CHC by way of local Reverend, Wilma Jakobsen of St. Jude’s Episcopal Church in Cupertino. Reverend Jakobsen was the first woman to be ordained as a Deacon in the diocese of Cape Town, South Africa by Archbishop Tutu and served as his chaplain as well. After many years of service in her native South Africa and later in Southern California, Reverend Jakobsen become St. Jude’s Rector in 2013. Hoping to expose a new generation to an iconic figure of both the anti-Apartheid struggle and a world famous peace activist, Reverend Jakobsen, jumped at the chance to have Sumaya’s work introduced to the Cupertino area.

Archbishop Tutu was the first black Archbishop of Cape Town and received the Nobel Peace  Prize in  1984, the Albert  Schweitzer Prize for Humanitarianism in 1986,  the Pacem in Terris Award in 1987,the Sydney Peace Prize in 1999, the Gandhi Peace Prize in 2007, and the Presidential Medal of Freedom in 2009. He is now retired.

Sumaya Hisham is a freelance photojournalist who originally created this photo-exhibit as a charity project. She is passionate about capturing images of people in their daily life. Sumaya covers news and cultural events for a variety of clientele that includes agencies, newspapers, magazines and corporates amongst others. Her work has been published worldwide in all forms of print and electronic media.