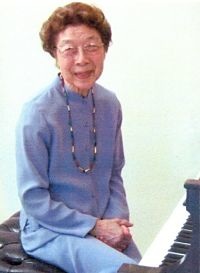 Transcription of excerpt: taken from minute 24 to minute 36 (approximately)
This excerpt was chosen by the interviewer because it displays facets of Miss Onishi’s personality that are evident in her teaching. She has a rare combination of practicality and poetry which inspires her teaching.

Was it difficult for you to travel to the U.S. for the first time?

When I was little my mother used to say “you’ll be going to America some day.” When the war broke, the dream was over. When the offer finally came, my mother was very eager. My father was not so eager to lose his daughter. But everything was so easily arranged for me and especially when the Cartright’s offered their home to me, then my mother had no worry. But my father did. Since I had never traveled abroad, I didn’t know what to expect. I didn’t know if I could even breathe without my mother because we were so close. Then I got on the boat and I saw the moon and thought “same moon.” A Universalist member met me in San Francisco and took me to their home to rest. Then they got me on the train to Chicago, where I was met by another Universalist member. In Chicago I heard dogs bark and thought “same dogs.” Everything was so carefully and lovingly arranged.

What really saved me was to be able to study with Mrs. Genhart. She was a Swiss and when she discovered I came all the way from Japan 7,000 miles, she said “you came all that way to study with me?” and she was really like my second mother. Of course, Mrs. Cartright was my second mother also. Mrs. Genhart gave me so much special attention. I was brought up with a lot of care, overly protected, but with sensitivity. So was Mrs. Genhart. Sometimes she was hurt by the American ways of some students. We got along so well and I think she cared for me more than she cared for her daughters. We clicked.

What surprised you about this country?

At the very beginning there was such a plentiful quantity of material in every way, not only in food but paper. People would scribble a note and then toss the paper. During the war, we had to be so careful. My parents were well-to-do with three or four servants, but we learned to be very careful during the war. Also the girls at school were interested in boys more than in classes, some of them. I came here to study. And in Japan in those days, the marriage was arranged most of the time by the go-betweens so I didn’t have to look. I was introduced to a future conductor from a wealthy family, but I wasn’t very interested. I would be a millionaire now (laughter). It would be a very different life, I’m sure.

The Universalist scholarship was for two years, but the tuition was free the second year (because of a scholarship from Eastman) and then I worked in the summertime at Kodak and earned a living for the following year very easily. I practiced in the mornings and went to work in the afternoon and that was fine for three months. It was a different life there. When I finished Eastman, Mrs. Genhart said I should go to Aspen to study with Madame Levine or Mr. Frank Mannheimer. I was undecided, but then Mr. Mannheimer came to meet Mrs. Genhart that spring. She said “Meet us in the hallway around 2:00 and we will be back from lunch. I was in the hall under the clock (that was the meeting place at Eastman) and they got back. I met Mr. Mannheimer who was so friendly and he was ready to take me, so it was sort of meant to be. I studied for six weeks that summer in Duluth, MN. Mrs. Genhart gave me the foundation of piano performance: how to listen, how to pedal, all about touch and coloring. I did on my own a lot of coloring, but I didn’t know what I was doing to get the sound. Mrs. Genhart could put into words what I was doing. That allowed me to teach my students certain qualities. After her wonderful foundation, I went to Mr. Mannheimer who was fantastic in using creativity and imagination. It was a surprise almost to get to the same musical interpretation from the other side of the spectrum. Since I had all the technique down, he could say “make it sound like this” and I could do it. If I went to Mr. Mannheimer first, I wouldn’t have been able to do it.

I went back to Japan and performed. I was expected to return. My parents were so happy to have me back. After two years of performing, I felt rather cold and empty. It’s a limelight, but then you don’t make such communication with people and I loved teaching so I started to teach. I did both for some time. I didn’t teach at Eastman, but I coached some of my fellow students. I didn’t enjoy going on the stage and listening to managers talk (they treat you like a thing). Then you go to a city and practice, perform, and then travel again. I didn’t really enjoy that public life. I still have those students that I started to teach 50 years ago in Japan. They will do anything and everything for me. They are still performing. Most of them stayed at the conservatory. My former teacher only chose good students for me to teach. I was really fortunate.

“About the Author” from her book:

Aiko Onishi was born in Tokyo, Japan. She started learning the piano from her mother, Teiko, an accomplished pianist and graduate of the New England Conservatory of Music. She later studied with Mr. Motinari Iguchi and Miss Aiko Iguchi, his sister.

Upon winning a Japan National Competition, she was invited to study at the Eastman School of Music with Madam Cecile Genhart, who gave her a real foundation as a pianist. After earning the B.M. with Distinction, Performer’s Certificate, and Artist’s diploma, she continued to study with Frank Mannheimer with whom she coached on and off for the next sixteen years. During the winter of 1964-65, she had the great privilege of studying with Dame Myra Hess in London.

Aiko Onishi has concertized and given lectures in over 60 cities in the United States, and has played in all of the major cities in Japan. She was a professor for six years at the Toho School of Music in Japan and for twenty-one years at San Jose State University in California. As a teacher, Miss Onishi has produced many outstanding students, some of whom have won prizes an international competitions, including Leeds, Busoni, Casadesus, Kapell, Chopin, Munich, University of Maryland, and the Washington International Competition.