De Anza student Ray Ostil has some big changes coming up later this year: He’s retiring from the U.S. Army after 20 years of active service – and he’s transferring to Stanford University this fall.

Ostil, a 41-year-old Communication Studies major, shared his joy at being accepted by Stanford in a video that shows his reaction upon opening the email from the university’s admissions office.

After checking his inbox obsessively for weeks, Ostil said he worried that the latest message might be a notice that he needed to submit more paperwork for his application.

“Then I clicked on the email and I saw streamers” – digital special effects that Stanford adds to its acceptance message. “And I realized: ‘I got it! I got into Stanford!’”

Ostil’s teenage son, Raymond Jr., can also be seen in the video, sharing his dad’s excitement. Ostil was a single parent for several years until he remarried, and works full-time as a military paralegal for the U.S Army, while taking classes at De Anza. He plans to pursue a bachelor's degree in communications at Stanford, with an eye toward going to law school after that. 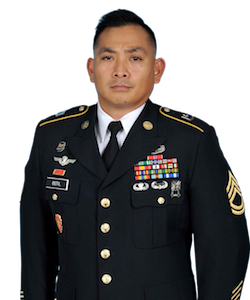 A Bay Area native whose parents emigrated from the Philippines, Ostil is an Army sergeant first class who served in both Iraq and Afghanistan before his current assignment at the Presidio of Monterey. Like many military service members, he took classes at a variety of public and private colleges during his deployments. But he came to De Anza after an Army adviser told him it was a good place to prepare for a four-year university.

At De Anza, Ostil said he especially enjoyed courses in Communication Studies and Political Science, which helped inspire him to pursue a civilian career in law or public service.

“He’s very enthusiastic and engaged,” said political science instructor Jim Nguyen, adding that Ostil introduced himself early in the quarter while taking one of Nguyen’s courses online. “I got the sense that he wanted to make the most of his opportunities here.”

In an essay written for a Veteran Services graduation project, Ostil thanked De Anza’s faculty, staff and fellow students who supported his goals for transferring and embarking on a civilian career. “My personal experience at De Anza showed me: When the world seems to count you out, the De Anza community does not," he wrote. "They believed in me when I could not.”