The California History Center at De Anza College received a very special gift in December 2013: a generous donation by community member Margaret Butcher to establish, in honor of her mother, the Audrey Edna Butcher Civil Liberties Education Initiative. The gift will also help ensure the ongoing operation and long-term sustainability of the CHC.

Audrey Butcher was an area grammar school teacher during World War II.She witnessed the disappearance of numerous students from her classroom as they and their families were forced, with thousands of other Japanese American citizens, into isolated internment camps in the nation’s interior. 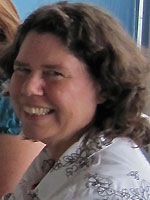 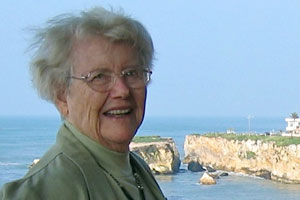 Audrey never forgot her students and their unconstitutional detainment in the camps, committing herself to educating others on history and the importance of civil liberties.

At a Day of Remembrance event more than half a century after the war, she urged De Anza College students to “never let this happen again” to anyone. She died in December 2012.

Margaret Butcher donated the funds in her mother's memory in order to provide De Anza students, faculty and community members with resources and partnership opportunities, both on and off campus, focusing on the protection of civil liberties. Following in the footsteps of her mother, Margaret is a longtime teacher.

“I am well pleased in the form this gift has taken,” she said. “It combines my mother’s and my beliefs in the importance of history, civil liberties, public education, books and in putting your gifts where your heart is in order to develop the gifts of others.”

"This is a truly phenomenal gift," said CHC director Tom Izu. "It provides us with an opportunity to develop creative programming on the civil liberties so critical to our society. In addition, the gift breathes new life into the California History Center."

The donation will bolster the CHC’s long-term sustainability efforts by adding support services and expanding and maintaining the library and archives. Audrey Butcher was a stalwart supporter of public education and the preservation of California history, serving on the CHC Board of Trustees from 1988 to 1994. As an adult, she took classes at Foothill and De Anza colleges, which Margaret and her two siblings also attended.

“I'm encouraged to see the California History Center continue and grow as a part of De Anza College,” Margaret Butcher said. “There is a lot more we are teaching and are taught than simply the subject matter of our curriculum. We are entrusted with the education of excellent citizens who understand and can defend the importance of civil liberties.”

"At De Anza College, we focus on educating the whole student, with a clear emphasis on social responsibility and community and civic engagement," said De Anza College President Brian Murphy (retired June 2018)."Ms. Butcher's gift to the California History Center ensures that her mother's legacy will be students and community members better educated in the wrongs of the past, and the preservation of civil liberties now and in the future." 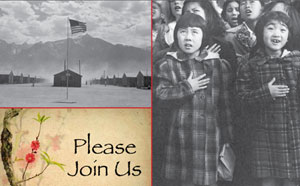 Margaret Butcher, and the memory of Audrey Butcher, were honored at a reception in the California History Center from 3:30 to 5 p.m. on Wednesday, Feb. 19.

The event featured remarks from U.S. Rep. Mike Honda (17th Congressional District) who as a small child was detained with his family in an internment camp. Music was provided by Emmy-winning composer Mark Izu. The event also included exhibits from the CHC library and archives and a student project from the Euphrat Museum of Art on human and civil rights.