Red Wheelbarrow, the De Anza College literary magazine, appears annually in both a National and a Student Edition.

The National Edition, published each fall, is open to poets and writers from around the country and the world. The national edition also sponsors the annual Red Wheelbarrow Prize for poetry. The national edition of Red Wheelbarrow accepts unsolicited submissions September 1st through February 15th at weisnerken@fhda.edu. However, the annual poetry prize deadline through Submittable.com is August 15th. See below for more detailed guidelines for both the magazine and the prize.

The Student Edition, published each spring, is open only to submissions from student writers & artists enrolled at De Anza College. See below for student edition information.

Founded in 1976, Red Wheelbarrow was known as Bottomfish until 2001. 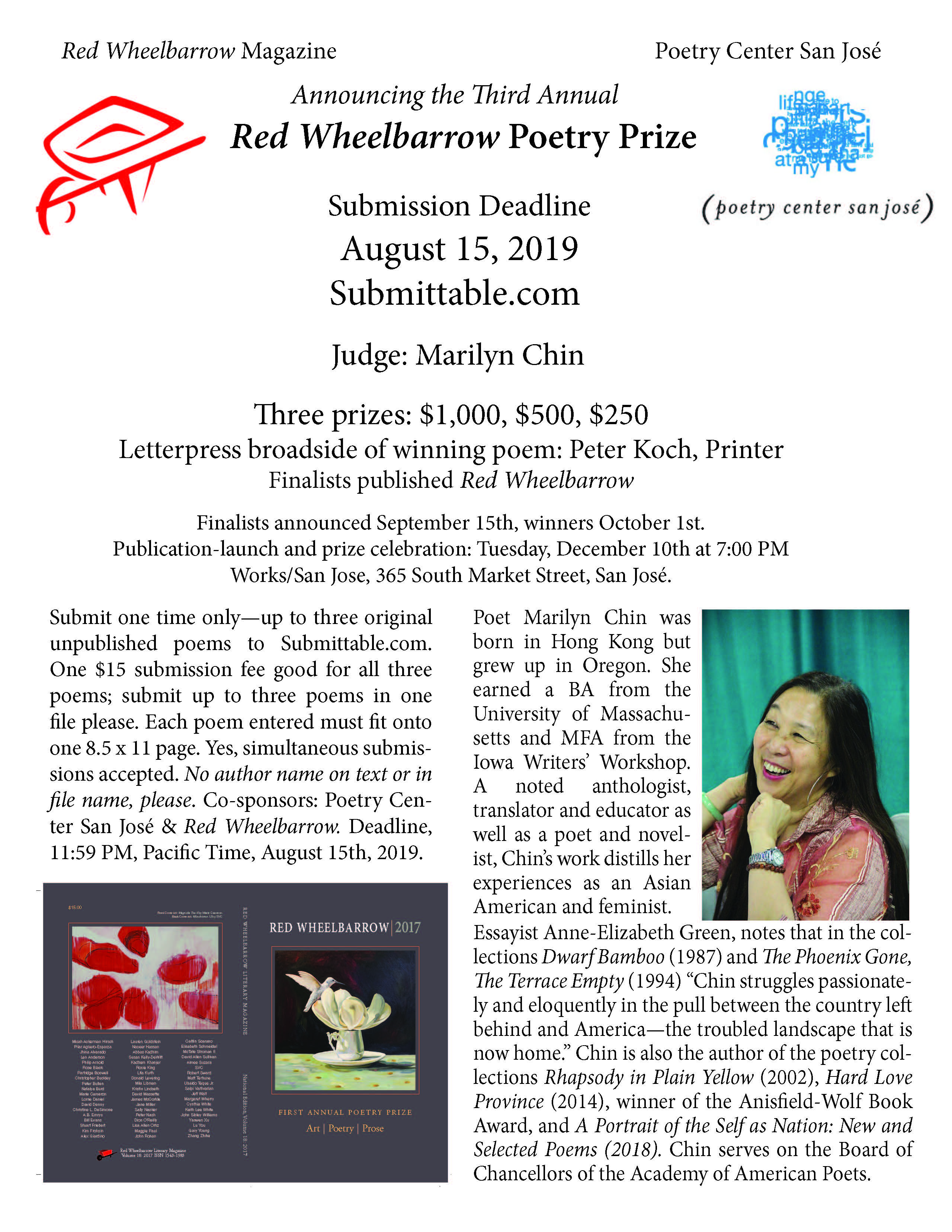 These poets received awards of $1,000, $500, and $250 respectively, and Felicia Rice of
Moving Parts Press has produced original broadside of Lynne Ellis's "Seamstress"

These poets received awards of $1,000, $500, and $250 respectively, and Felicia Rice of
Moving Parts Press has produced original broadside of Lynne Ellis's "Seamstress"

2018 Finalists:
“Essential Chili Peppers of Mexican Cooking,” J.D. Amick
“The House with the Piano,” Lynne Ellis
“The Thinking of It,” Mika Kligler
“How is Home,” Lisa Ludden
“Of Frogs,” Seth Simons

These poets will receive awards of $1,000, $500, and $250 respectively, and Gary Young of
Greenhouse Review Press will produce an original broadside of Partridge Boswell’s winning
poem, “Pop a Wheelie.”

The poetry prize is open for submissions annually through spring and summer (Submittable.com).

Submit, one time only, up to three original unpublished poems in a single manuscript. Submit online at
https://redwheelbarrow.submittable.com/submit

To Order Current or Back Issues

In the body of your e-mail, please indicate:

Follow up that same day by mailing a check PAYABLE TO RED WHEELBARROW @ $16.00 PER ISSUE (this includes domestic shipping and handling) to the following address:

You can also do this process entirely by USPS. Include all the information listed above with your request.

We will fulfill your order within 7-10 days.

STUDENTS: To join the staff of Red Wheelbarrow—sign up for EWRT 65/68)

Deadlines: Submissions accepted between September 1st and February 15th for the National Edition (and May 20th for the Student Edition).

National edition contributors: Please include a brief autobiographical statement. For snail mail submissions, enclose an SASE and/or an email address for reply.

Student edition contributors: Please do not include your name on the manuscript itself, only in cover letter or body of e-mail. All work (including work submitted by Red Wheelbarrow staff members) is judged anonymously.