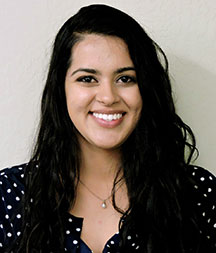 Parjosh Sangha never expected to become involved in De Anza’s student government. She came to community college for financial reasons and wanted to transfer as quickly as possible.

“When I did my research I learned that this school has a high transfer rate and is a really good community college,” said Parjosh. “During orientation, students would encourage us to join clubs, and I was surprised I became one of those people presenting to new students coming in.”

Parjosh credits her involvement in De Anza’s vibrant student life with her success.

“Being in student government got me really involved in campus and made me more outgoing and social,” Parjosh said. “I looked up any volunteer opportunities in the area and I would help get other students involved.”

When Parjosh first arrived at De Anza, she was “a little lost.” Unsure of her career interests, she decided to study nutritional sciences and eventually transfer to UC Berkeley. Then, two teachers invited her to be a supplemental instructor for their courses. Through tutoring, Parjosh met students involved in DASB and joined the honors club. She ran for club treasurer.

A year later, she was Honors Club president and head of the DASB Diversity Committee. Parjosh also participated in one of the professional photo shoots on campus and was recently featured in the college's VTA bus ad campaign.

"From the first moments that Parjosh was in my class, I could tell she was a special person and student. She was always so collaborative, and she never saw her education as competitive,” said English instructor Lydia Hearn. “Instead, she welcomed ideas from her fellow students to help her grow and she shared her own thoughts to help them grow. The emotional and intellectual maturity that Parjosh displayed and continues to display is admirable."

As her student life was taking off, Parjosh was laying the groundwork for her professional career. She worked as a cashier at her local pharmacy and liked the environment so much that she earned her Pharmacy Technician certification. She also switched majors and decided to attend pharmacy school.

“When I was applying to University of the Pacific, my resume was three pages,” Parjosh said. “At De Anza I was given so many opportunities, and I tried to take advantage of as many as I could to expand and grow.”

Parjosh would like to return to work at her local pharmacy when she finishes her studies in two years. For now, she’s looking forward to university life, and is even contemplating joining student government once again.

“The senate helped me a lot with leadership and understanding others needs,” Parjosh added. “Don’t lose confidence and don’t be afraid to get involved.”

Two former film/TV students had their work shown as part of the annual Cinequest Film Festival in San Jose. 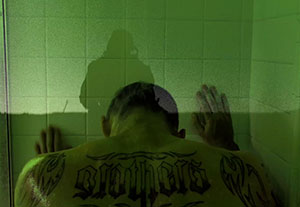 Jeremy Deneau’s six-minute film “No Refuge” was selected for the Shorts Program 8: College Film Competition. A still from the film is pictured here. The competition included selections from prestigious film programs at UCLA, NYU, Columbia, Stanford and the London Film School. De Anza was the only community college represented in the competition.

“No Refuge” is about a U.S. war veteran with PTSD who struggles to adjust to life at home. Deneau transferred to the USC School of Cinematic Arts last year.

Alum Kurt Kuenne co-wrote and edited the festival’s opening night film, “Batkid Begins: The Wish Heard Around the World.” The film, directed by Dana Nachman, documents the day San Francisco was turned into Gotham City to fulfill a sick child’s wish. “Batkid Begins” was the official selection of the 2015 Slamdance Film Festival in Park City, UT.

The President's Award, worth $2,000, is presented annually to a graduating student who has overcome significant adversity and shown great perseverance in seeking an education at De Anza. 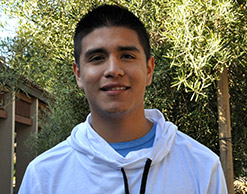 When Luis Fernando Zuniga walks across the stage at commencement this June, he will become the first college graduate in his family. Zuniga, recipient of the President’s Award, is transferring to UCLA to study sociology and public health.

“Although my family had little knowledge of how to help me in my education, their love and life lessons are the true motivators for my success,” Zuniga said. “My older sister always told me, ‘Work hard for what you want, because those who work the hardest are the ones who achieve their goals.’”

At De Anza, Zuniga found a support system that could help him achieve his goals. He joined Latina/o Empowerment at De Anza (LEAD), and participated in the club’s annual Global Issues Conference. He worked with the Transfer Center to ensure he was on the right track to transfer to a four-year school. He also was accepted into Extended Opportunities Programs and Services (EOPS), which provided some financial assistance, and most importantly, a counselor.

“[Truly Hunter] is a great mentor to me,” Zuniga added. “She’s always there to push me and she inspired me a lot.”

Because of that inspiration, Zuniga wants to be a mentor to others himself. He tutors struggling high school students and encourages them to finish their degree. He also volunteers in the Emergency Department at Kaiser Permanente. He received the Volunteer of the Month Award for perfect attendance.

Although it will be difficult to leave his family, Zuniga is excited to start school in Los Angeles. He will move into his dorm next month to participate in a special summer program that preps incoming transfer students for life at UCLA.

“Never in my wildest dreams did I think I would be in college,” said Zuniga. “My advice to others is to knock on every door and keep knocking until one opens.”

The A. Robert DeHart Memorial Scholarship, worth $2,000, is presented in memory of the founding president of De Anza. It is awarded to a graduate who exemplifies service and participates in campus life. 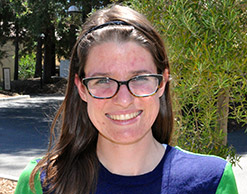 Marina Menendez-Pidal wasn’t sure what she wanted to do after high school. She was considering her options when her mother recommended taking art classes at De Anza. The experience has changed Menendez-Pidal in ways she didn’t expect.

“I went from being shy in high school to actually communicating with people, and helping the campus and the community,” she said.

Menendez-Pidal is graduating with an A.A. in Liberal Arts, Arts and Letters emphasis. She plans to attend San José State in the fall to study graphic design.

“I’ve enjoyed my time at De Anza,” said Menendez-Pidal. “I was able to look at different areas of study that caught my interest, then really hone in on one.”

Menendez-Pidal is active on and off campus. She volunteers at the Villa Montalvo Art Center and the Asian Liver Center. As vice president of Team HBV, she helped organize fundraising and screening events to raise awareness about Hepatitis B. She represented the group at Inter Club Council meetings. She is a member of the Phi Theta Kappa honor society and the school Honors program. She participated in First Year Experience and works as a tutor in the Student Success Center.

“I love tutoring -- it’s really fun,” Menendez-Pidal added. “I struggled in English, and I want to give back to the students and the center.”

Through her studies, Menendez-Pidal discovered a graphic design group based in Korea. Inspired by their work, she began taking Korean and hopes to study abroad there one summer. She plans to take more Korean classes at San José State.

“De Anza has been a good experience for me,” said Menendez-Pidal. “I hope others can make the most of all the services here.”

The Karl S. Pister Leadership Opportunity Award is presented to talented California community college students who want to transfer to UC Santa Cruz. Awards are $10,000 per year for two years. All candidates must have overcome adverse socioeconomic circumstances, have a demonstrated commitment to assisting and improving the lives of others, and have financial aid eligibility.

Things changed in his last year of high school. Ruiz found out he was undocumented. At the same time, his parents’ marriage was disintegrating. Dejected, Ruiz found he could not focus on his education. Before long, he was homeless.

“Homelessness brought significant lessons that marked my life just as much as living at home with my parents,” said Ruiz. “I learned to value and absorb the best of both worlds in order to build the foundation of my unfulfilled dreams.”

Ruiz’s own struggles made him eager to assist others in similar situations. He began working with local community organizations and helped form Revolutionary United Mexicans in Combat (Rumec), a construction company that fought poverty and corporate oppression through education and employment opportunities. Ruiz met other activists through Rumec, including Malcolm Shabazz, the grandson of Malcolm X. When Shabazz was killed in 2013, Rumec dissolved.

“The [life] of this exceptionally humble and courageous young man, who was descendant of a martyr and one of my closest friends, came to a sudden conclusion,” added Ruiz. “At that point, I had the calling to continue my higher education.”

Ruiz pursued his academic dreams with renewed vigor, enrolling full time and applying for Extended Opportunities Programs and Services (EOPS). He is graduating with an A.A. in Liberal Arts, Arts and Letters emphasis. He will study philosophy at UC Santa Cruz in the fall, and hopes to earn a law degree. His lifelong dream is to establish a nonprofit that provides high-quality legal representation and educational opportunities to people in need. In his free time, Ruiz enjoys salsa dancing and spending time with his family.

“All my accomplishments come down to what I did with Malcolm Shabazz,” said Ruiz. “I’m in gratitude, and I feel a sense of responsibility to do something greater with these funds.” 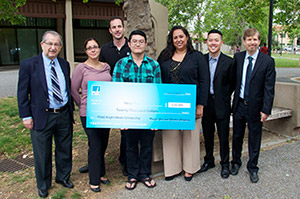 Hiep Ton got a big surprise in his physics class earlier this month. Instead of a lecture from his professor, class started with a group of PG&E representatives presenting Ton with a check for $20,000.

Ton is one of 10 students in the state to receive the Bright Minds Scholarship, an award of $20,000 per year for up to five years to complete his undergraduate studies. Ton plans to transfer to San Jose State next fall to study electrical engineering.