Vasconcellos Institute for Democracy in Action 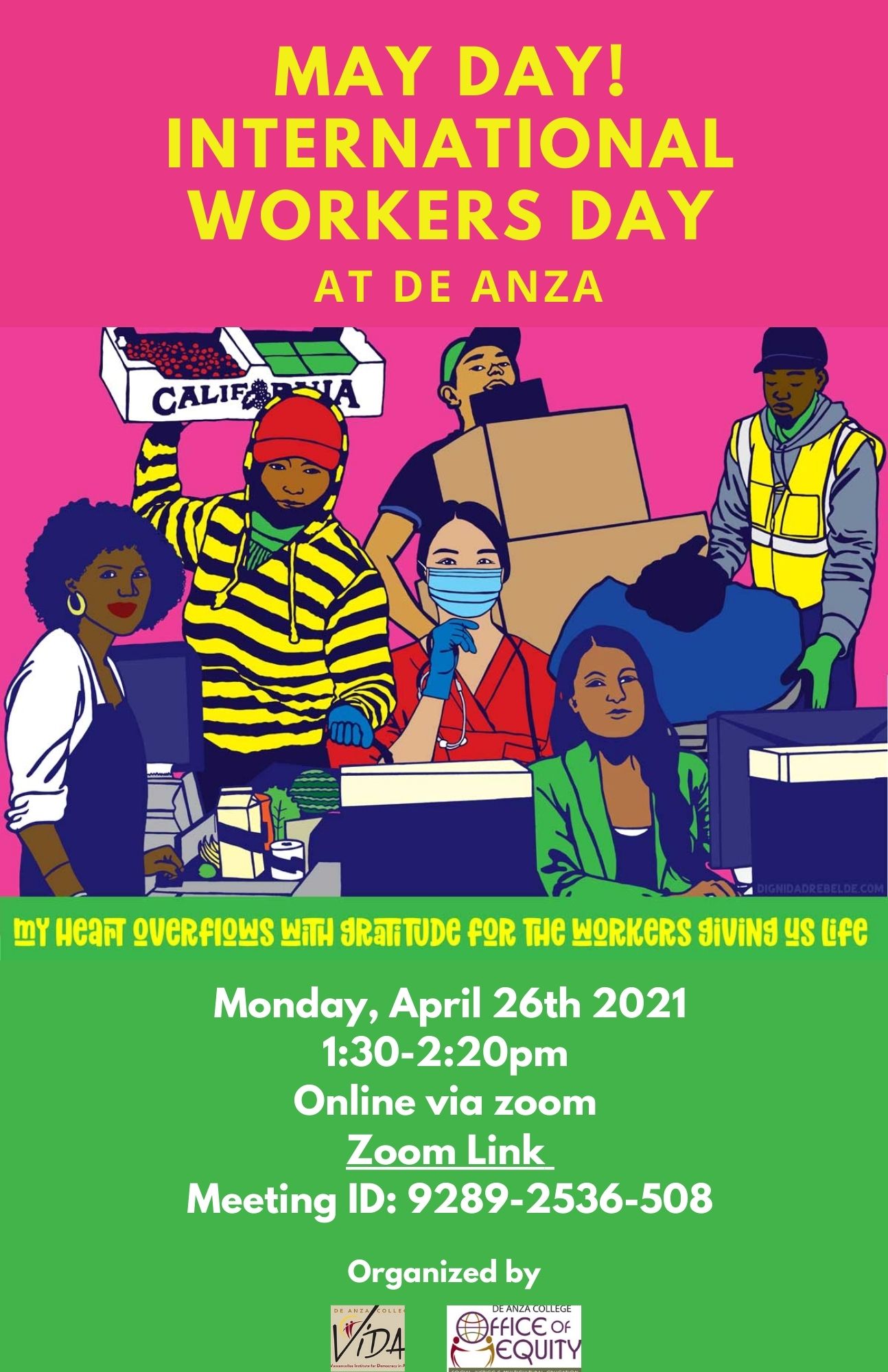 May Day, also known as International Worker’s Day, is celebrated to honor the struggle for working people’s rights. It began as a worldwide display of solidarity following the 1886 Haymarket Rally in Chicago where unionized workers were killed while striking in support of the 8-hour workday. Since 2006 it has also been a time to actively protest for the rights of immigrants. De Anza College asks you to participate in this event highlighting the history of the fight for the rights of workers and immigrants, the contributions of essential workers, and become more familiar with what it has meant for many of us to be in unions.

Presented by VIDA (Vasconcellos Institute of Democracy and Action) and Office of Equity, Social Justice and Multicultural Education

Born and raised in downtown San Jose, Jean Cohen's professional career includes decades working for local government, the labor movement, and the nonprofit sector to build social and economic justice through public policy and organizing. Jean worked for many years on housing, land use, and transportation policy for State Senator Jim Beall and San Jose City Councilman Raul Peralez. She served on staff at Sacred Heart Community Service as the Director of Development and Communications, developing tools for economic self-sufficiency for the working poor and homeless of Santa Clara County. During her tenure at SEIU-UHW, NUHW and as the Political Director of the Alameda Labor Council, Jean directed the organizing and legislative programs for over 120 affiliated labor unions in Alameda and Santa Clara Counties, engaging over 100,000 unionists through multiple election cycles. Cohen has been the Political and Communications Director for UA Local Union 393 since 2016. Jean is currently the Vice Chair of the Santa Clara County Democratic Party. She is an American Leadership Forum Senior Fellow and a graduate of Saint Mary’s College with an M.A. in 21st Century Leadership. The proud daughter of a union teacher and union musician, Jean is committed to building power for working people.

About the South Bay Labor Council 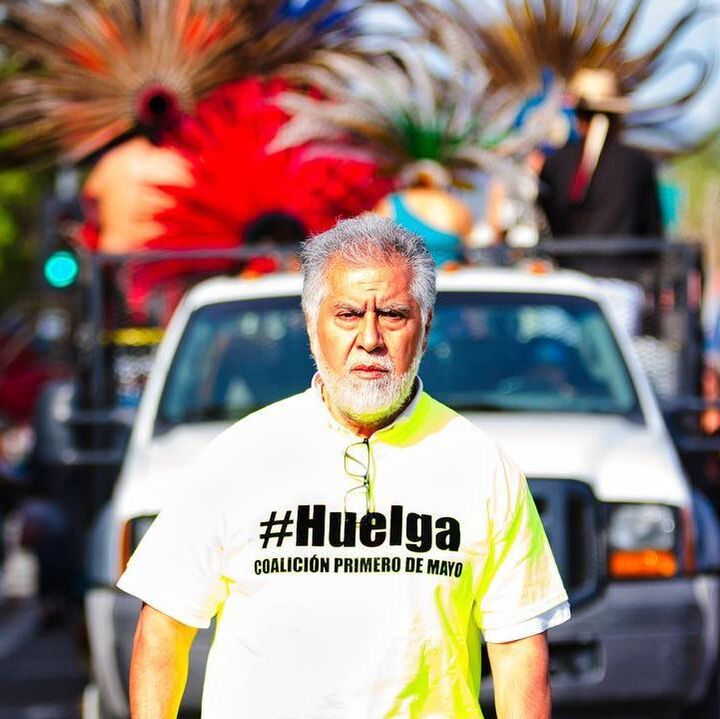 Salvador Bustamante (Chava) has worked to promote labor, human and civil rights for Latino immigrants in California for over 40 years. For the past 7 years Chava has contributed his time working as a full-time volunteer Executive Director for Latinos United for a New America a.k.a. LUNA, which he helped to found. Before helping to found LUNA, he was the First Vice President of Services Employees International Union (SEIU) Local 1877, where he worked for over 19 years.

Chava’s work as Labor organizer and community leader includes working with organizations and campaigns like the United Farm Workers Union, California Rural Legal Assistance, Mental Health Advocacy Project, Economic and Social Opportunities, Catholic Charities Legalization Project and SEIU Local 1877; the Justice for Janitors campaign, Healthy Kids Initiative, the Living Wage Ordinance and Just Cause in the city of San Jose. In all these capacities, he has assisted working families in their struggles to achieve a better life through community empowerment, leadership development and civic participation.

Chava is also a fellow with the American Leadership Forum (Class XVIII) and has served on the board of several non-profit organizations like Working Partnerships USA (WPUSA), Silicon Valley Raising (SVR) and Sacred Heart Community Service

​Latinos United for a New America is a non-profit based in San Jose. Fueled by the energy to change the inequality in our barrios and meet our community’s basic needs, community organizers worked to design and implement a survey campaign. With these surveys, what began to form as an organization would have a focus and a clear understanding of what the needs of the Latino community were in the East of San Jose, in the heart of the Silicon Valley.

Latinos United for a New America

Pan Africanist, Akubundu Amazu-Lott experienced first hand being profiled by the police, specifically pulled over at gun-point by the LAPD as a youth living in Los Angeles, CA,. This experience contributed to his understanding that African people in America were treated as second-class citizens.  He made his way out of Los Angeles to San Jose State University. There he participated in sports (football) and experienced racism on the field and in the classroom.  His resolve to change the situation of African People in particular and humanity in general lead him to join black student organizations and eventually received his B.S. in Business Administration and his Master of Urban Planning.  He was introduced to and joined the All-African People’s Revolutionary Party (AAPRP) in 1979 and is currently a member of the Central Committee.

In 1993, he was part of an A-APRP delegation that joined the late Kwame Ture in Guinea. There they met with with cadre of the People’s Democratic Party of Guinea (PDG) and strategized to build the A-APRP.  He has been an adjunct professor at San Jose State University for twelve years in the African-American Studies Department. He has lead  groups to Haiti, Belize, Cuba and most recently Africa to meet with grass-root organizations. It is through his extensive work and study of Pan-Africanism and the struggles of oppressed people globally that he remains motivated to work for positive change.

The A-APRP understands that “all people of African descent, whether they live in North or South America, the Caribbean, or in any other part of the world, are Africans and belong to the African Nation”. — (Kwame Nkrumah, Class Struggle in Africa, page 4). 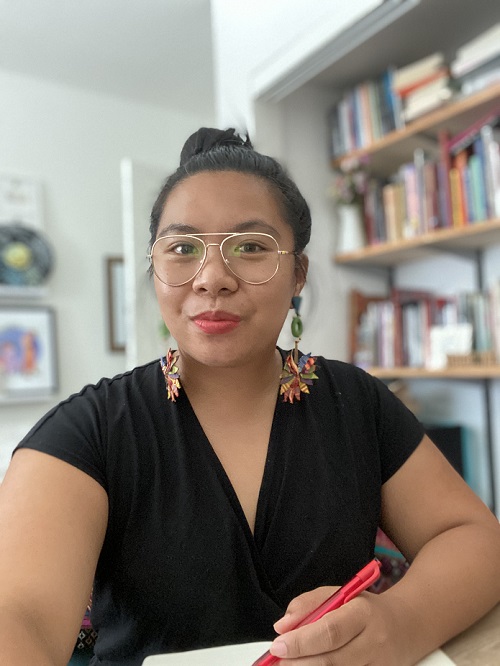 She is a Filipina American writer from the San Francisco Bay Area. She is a daughter of immigrants from the Philippines. She tells people that she has been reading her poems in front of people for ten years now. She is the author of two books of poetry: microchips for millions (Philippine American Writers and Artists, Inc., 2016), which is about immigrant women workers in Silicon Valley; and like a solid to a shadow (Timeless, Infinite Light, 2017 by way of Nightboat Books), which is about her father, family lineage, and learning Ilokano. She is the 2020-2021 Santa Clara County Poet Laureate, and a 2020 Poet Laureate Fellow with the Academy of American Poets. She was named one of the San Francisco Bay Area’s Women to Watch in 2017 by KQED Arts. In 2020, she started Santa Clara County's first Youth Poet Laureate Program as a chapter with Urban Word New York City as part of the National Youth Poet Laureate Initiative. She also co-founded Sunday Jump, a long-running open mic space in Los Angeles's Historic Filipinotown. She co-hosts the podcast Pinaystrology, which discusses BIPOC pop culture, poems, and the planets. She is a Leo Sun, Cancer Moon, and Libra Rising. She is an introvert, earrings collector, and expert at napping.

INFORMATION ON AMERICANS WITH DISABILITIES ACT AND ACCOMMODATIONS

Zoom offers the accessibility functionality described at https://zoom.us/accessibility . If you have any other access and functional need that will not be met by the features described above, please notify us at KaufmanCynthia@deanza.edu